By Arne Verhoef | HempToday – In the “New Green Revolution” brought on by the resurgence of Cannabis, Asian hemp, with the most genetic diversity on the planet, has a decided advantage.

Ironically, hemp escaped much of this development, handicapped by international narcotics conventions. Now, as the return of the Cannabis plant presents a “New Green Revolution” all its own, hemp is rapidly entering mainstream agriculture worldwide.

As the homeland of Cannabis, no place on Earth has a longer history with hemp than Asia. Cannabis occurs all over the continent, from Afghanistan and Vietnam, to Thailand and the Koreas. In India, there are probably as many hemp varieties as there are languages, while in some parts of China it would seem that every valley has its own unique crop.

A richness of heritage strains

Russia, which has maintained a germ-plasm collection of hemp, similarly has a wide range of heritage and feral Cannabis varieties, including so-called “ruderal” plants, auto-flowering, monoecious plants perfect for seed-crop development and the target of decades of unsuccessful eradication by law enforcement.

As part of the global resurgence in hemp cultivation, many Asian countries have either intensified their production – such as China, by a factor of 6; have paved the way for commercial production (India); or are trying to establish a modern-day industry (Mongolia, Japan).

Challenges do exist in Asia – primarily in legal restrictions left over from the days of the global War on Drugs. Misconception and outright ignorance block rational policy-making and the development of hemp in many countries.

Also, worryingly, many Asian countries are eager to copy the globally recognized but arbitrary line that separates “narcotic cannabis” (marijuana) from “non-narcotic” cannabis (hemp), the latter defined as having 0.3% or less THC.

Asian countries would be wise to take note of forward-thinking nations elsewhere in the world which are looking at a THC limit of a full 1.0% or higher. They shouldn’t be so quick to go along with rest of world, and can in fact help to lead the industry out of such restrictive thinking by capitalizing on the continent’s genetic diversity.

Japanese hemp is a good example of this potential. Having historically been cultivated for seeds and fiber, it was by hybridizing with Japanese genetics that the United States Department of Agriculture obtained its tallest hemp crop in the early 20th century, reporting that three of these hybrid strains reached heights of between 15 and 19 feet, and yielded longer inter-nodes, and more and better fiber.

But traditional Japanese hemp can contain up to 3.9% THC, making it not viable under any current global standard. However, crossing these high yielding strains with super low THC hemp can certainly result in hemp at 1.5% THC or lower within just a handful of generations. With modern genetic tools even faster. But only if we realise THC content is not a good indicator of agricultural potential, despite what bureaucrats may say.

Before international narcotics laws, hemp was selected not on its THC value, but rather its agricultural traits and adaptability – standards that must set the framework for the industry in the days going forward.

The Chinese government is certainly paying attention to the potential of its crops, and making good use of them in the modernization of its hemp industry. Through international partnerships and government programs, the Chinese are creating new varieties with modern breeding and their extensive genetic resources, to create high-yielding varieties that perform under a diverse array of conditions. 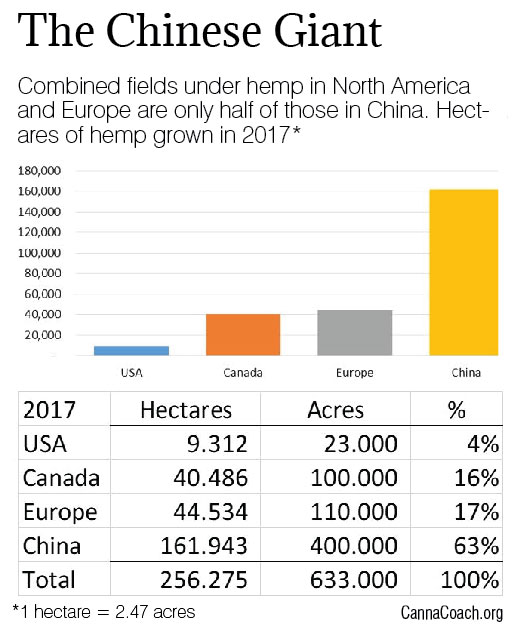 In China, ‘It cannot be revealed’

Even China, with its severe drug laws, has often turned a blind eye to some production areas, so that the People’s Republic could rapidly become the world leader in hemp production.

Although the 0.3% THC limit officially applies in many regions, just last year a scientist asked about the extent of Hemp cultivation in China, stated: “It’s a big figure. It cannot be revealed to the public. Many farms are, strictly speaking, illegal under current law and regulations” https://www.scmp.com/news/china/society/article/2108347/green-gold-how-china-quietly-grew-cannabis-superpower.

Why are these varieties being grown? Because they are high-quality, high-yielding crops with a long history of cultivation, despite their more “colorful” cannabinoid profile.

In Pakistan, they successfully produce quality hemp seed oil from high-yielding but under-domesticated varieties, with an appreciable amount of oil – up to 31.5% – from wild hemp growing in the mountainous regions, and filled with protein comparable to the best of “industrial” (read: low THC) hemp. It’s of course difficult to quantify their yield/hectare, as very rarely have these hemp varieties been grown in strict agricultural trials.

In Nepal they are building houses from shivs produced from their own local Cannabis “wild crop,” and like many others, using the technical fibers in textiles, and hemp oils and extracts in cosmetics.

Mongolian projects are looking at that country’s near-wild Cannabis populations for interesting and valuable traits to establish a thriving hemp industry, while in India they are trialling indigenous varieties from the Kashmir region, showing perfect adaptation to their environments and hopefully responding well to commercialization.

Though the modern hemp value chain necessitates creating improved varieties, the historic varieties can easily be used to kick-start hemp industries in Asia. Using native landraces is the most logical step in producing well-adapted varieties for local conditions and domestic production.

Collecting these varieties across the continent and establishing well-managed gene banks will be critical to conserving cannabis biodiversity and valuable traits, as Asian industrial hemp takes its rightful place in The New Green (Cannabis!) Revolution.

Arne Verhoef is Managing Editor of HempToday. A trained biologist, horticulturist and developer of health products based on CBD hemp and other healing plants, he also manages The Stokvel Collective, a Community Supported Agriculture project in South Africa that seeks to spread regenerative agriculture through grassroots action.