Small is beautiful at Obelisk Farm. That’s the spot in eastern Latvia where Andris Visnevskis and Debora Paulino have escaped the urban life and are living out their hemp dream.

“We did it mainly because of the kids,” Visnevskis said of the couple’s transition from the bustle of London to the clean air and pastoral life of the farm in 2013.

Having read about the properties of hemp seed oil, Andris and Debora purchased the run-down 2.5 hectare property – which includes an old farm house and several stone and wooden out buildings – with visions of entering the hemp food market.

While their initial idea was to grow hemp for its nutrient-rich seed, the couple quickly realized that their farm’s small size and lack of proper machinery called for an adjustment to the business model.

So in their second year at Obelisk, they added educational tours of the farm and launched a series of workshops in how to grow hemp, and how it can be used in food, paper, and for construction.

Andris is insulating the farmhouse with hempcrete, a project launched in 2017 when legendary hemp builder Steve Allin taught the first hemp construction workshop on the farm. This year’s second edition drew attendees from around the Baltic States, Poland and Canada.

Obelisk Farm also has an online shop that sells packaged hemp-seed food and tea from the flowers and leaves – products that are in growing demand in Latvia. In addition to individual consumer sales, the company has been successful among B2B customers who purchase Obelisk’s products in bulk as corporate gifts.

Visnevskis said Obelisk’s hemp agro-tourism activity and the shop drive most of the enterprise’s income.

When tourism slows down during winter, the couple keeps busy hand packing their tea and seed products in time for the important holiday sales season.

Dreaming of a farm

Andris and Debora, who’s from Portugal, met at Art Academy of Latvia carnival event in 2009. They later spent three years in London where Andris worked as a bricklayer while Debora tended bar. 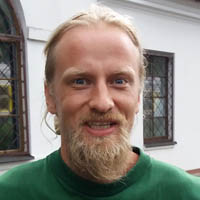 Meet Andris Visnevskis and other great speakers at Hemp2020 Oct. 19-20

“We were just working and saving money to buy a farm when we got into the idea of hemp. It all just came together,” said Visnevskis. After considering Portugal and Latvia, the Latvian property proved to be a better buy.

The rundown farm required three years of renovation and grooming, most of which the couple did themselves before planting their first hemp crop in 2015. They’ve recruited volunteers to bring in their harvest by hand each year, drawing both Latvian and international workers.

Obelisk’s Hemp School is in a stunning old stone building that serves as a multi-purpose lecture and dining hall, and the complex has separate buildings for a library guest room, a retail shop, a shed for building materials and mixing hempcrete; and facilities for drying and storage.

He’s a strong proponent hemp in Latvia, which grew about 1,000 hectares in 2017; fields have grown gradually since 400 hectares were reported to have been under hemp in 2010. Meanwhile, various processing facilities are located in all regions of Latvia, with stakeholders concentrating for now on seeds and, to some extent, fiber raw material for export. For now, there is no hemp growing for CBD in Latvia, Visnevskis said.

With a relatively simple licensing regime and €500-per-hectare EU subsidies still available, Andris sees potential for continuing steady growth of hemp fields across Latvia, and a continuing need to promote the expansion of industrial hemp for all it has to offer.

That’s the mission Visnevskis driving Obelisk Farm: Promoting, teaching, advancing expansion of industrial hemp up and down the value chain.

“The key thing is education,” said Visnevskis. “We want to demonstrate how the plant can be used — all of its uses.”