By Daniel Kruse
Special to HempToday 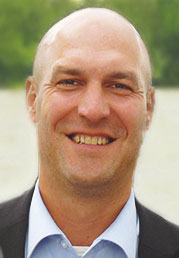 If Europe doesn’t move fast on hemp, we’ll be missing an historic opportunity to maintain our rightful place as the leader of the crop’s revival in the 20th and 21st centuries. And it all comes down to THC.

While most European countries follow an EU directive that sets THC limits for hemp at 0.2%, leading hemp nations around the world operate on a generally accepted global standard of 0.3%.

That EU member states – guided by wobbly directives from Brussels — continue to operate under the 0.2% THC limit, puts our producers at a critical disadvantage as the global hemp industry quickly expands.

The negative effects of the situation in Europe are evident up and down the value chain and particularly in the food and medical hemp sectors. But it all begins with the seed. The 0.2% THC limit observed 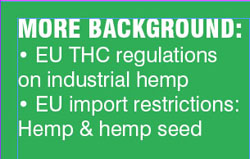 by most EU countries means they haven’t been able to develop the high-yield seed varieties and high-CBD strains that are now in great demand. Such strains are absent any significant THC but can exceed the 0.2% limit. At the same time, several valuable high-yield hemp seed varieties, especially from Eastern Europe, are not viable on the market under the 0.2% THC constraint. Time, value and money already have been lost. That milk has already spilt.

Meanwhile, as we in the EU now fight for an adjustment of 0.2% to 0.3% allowable THC, the world moves forward, led, ironically, by non-EU member Switzerland, which allows a full 1.0%. Its recent experience with “Nobacco,” the high-CBD hemp leaves that are being rolled into cigarettes and sold in pouches for roll-your-own, is a recent example of how logical rules can have direct – and positive – economic consequences.

Swiss producers started cashing in on this newest hemp craze last year precisely because their government recognizes the scientifically proven fact that even a full 1.0% THC in hemp food, food supplements or medical products won’t get you high – so that’s the level they’ve set. With no worries about the 0.2% THC limits, producers can process high-CBD hemp strains with no worry. Other countries – Uruguay and Australia, for example – both have started discussions about lifting THC limits to match the Swiss example. Expect other countries to up the ante as well.

To compete, we need change

All over the globe, the hemp food and medical sectors are showing intensive growth as consumers learn of the nutritional and healing benefits of these products. We need the European Union to quickly raise the allowable amounts of THC to underpin our current competitive position in these highly competitive markets.

Our leaders need to recognize that without change, European growers and producers are sure to fall yet further behind in this fast-moving industry. And the need for change won’t stop any time soon. The battle to achieve a 0.3% THC level for Europe won’t be the last one. The fight for hemp will go on and on. In the long struggle to free cannabis, that’s nothing new.

DANIEL KRUSE, Founder of both Hempro Int. and HempConsult,  has been in the hemp industry since 1995. Hempro Int. is a vertically integrated Dusseldorf-based producer and wholesaler of hemp foods, bulk raw materials for food, textiles, accessories and cosmetics. Kruse is a senior advisor to entrepreneurs, startups, investors and other industry stakeholders through HempConsult GmbH, an independent hemp industry advisory.