A riddle set in motion by European Union authorities earlier this year has hemp food producers on the continent scratching their heads this summer. Changes in how CBD is considered under the EU’s Novel Foods Directive, never announced but eventually noticed by some producers, is sure to cause more confusion in an already confusing sector.

While a previous statement on CBD in the Novel Foods Catalog took a purely descriptive, and somewhat vague, approach, stakeholders recently noticed the definition had been re-written to state that any products which have more CBD than the plants from which they are derived are now considered novel foods. This affects particularly what’s generically referred to as “hemp flower oils,” industrial hemp green matter rendered in concentrated or extract forms. The change has the potential to throw yet another wrench into the European hemp food sector.

Novel food is defined as food that was not consumed to a considerable degree by citizens of the EU prior to 1997, when the first regulation on novel food came into force. Novel food can be newly developed, innovative food, food produced using new technologies and production processes, and food traditionally eaten outside the EU. The regulation requires such foods be safe and be properly labeled so as not to mislead consumers, among other requirements. The upshot for producers is a more burdensome marketplace as novel foods undergo stringent and costly authorization requirements.

Stakeholders noticed the definition had been changed, perhaps as far back as November 2017.

That’s only the latest challenge to CBD among Europe’s hemp stakeholders, who continue to contribute to the debate at the European and global levels.

The European Industrial Hemp Association and the Foundation for Alternative Approaches to Addiction (FAAAT) testified during the recent World Health Organization (WHO) public hearing in early June. While WHO is believed to be leaning towards a “hands-off” approach to CBD, the organization’s consideration is vitally important because WHO’s final evaluation eventually goes before the UN Commission on Narcotic Drugs (CND).

At the June hearings, Franjo Groterhermen, M.D., Germany perhaps best summed up the industry’s fears over a continuing disregard of medicinal value of cannabis-derived medicine.

The compound will suffer continuing credibility problems until doctors are made to fully understand CBD and the clear connection between CBD and patient therapy, Groterhermen noted in comments during the WHO hearing.

Doctors, scientists and government should work for the benefits of citizens and eliminate narcotics laws that bar access to cannabis treatment and in fact often criminalize its use, Grotenhermen said.

That’s a reflection of how stakeholders are getting more aggressive in lobbying efforts to raise allowable THC levels for industrial hemp plants that are hurting hemp farmers and producers in the food and health value chain. Maintaining the current 0.2% THC in-crop limit for hemp is already damaging the industry. As the trend toward higher allowable THC levels spreads globally, the European hemp industry will find itself falling further and further behind absent this critical change due to limited number of strains eligible for direct payments.

Likewise, stakeholders say EU officials need to develop clear rules to overcome confusion created when the European Commission scratched the requirement for member states to report THC data from field samples in 2013, effectively leaving each of the 27 member states to sort out whether a particular hemp variety can be grown. Having an EU-wide set of rules could help to simplify complex sampling regulations which hamper the industry.

Despite the most recent confusion over food and the haggling over THC levels, Europe’s CBD market is growing fast, with first-generation CBD products being replaced by more sophisticated ones. Many new products are entering the market, with the customer base expanding and prices dropping as more and more suppliers enter the market. 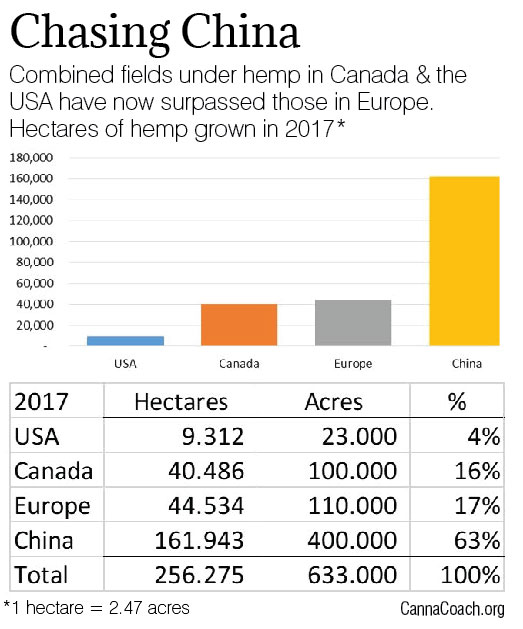 Of course, the CBD gold rush has brought with it downsides: Price wars are underway, and some bottom-feeder CBD suppliers are turning out products of questionable quality, compounding CBD’s struggles with bad PR. That’s brought damage to the trust in hemp products. EIHA has proposed a three-tier regulatory framework for products containing CBD, noting the current “tenuous patchwork” of rules covering CBD and hemp extracts in the European Union put in peril the CBD food supplements sub-sector.

Meanwhile nascent efforts to self-police the CBD market got underway last year when the International Cannabis and Cannabinoids Institute (ICCI) began testing products and checking the claims on their labels. Rather alarmingly, ICCI found that only 9 of 29 European CBD oils proved “satisfactory” when tested for polycyclic aromatic hydrocarbons (PAH) — classified as carcinogens — prompting the Prague-based group to issue a warning about CBD and cannabis oils sold on the EU market.

EIHA also continues to push THC issues, most recently repeating its demand that the European Commission develop harmonized guidelines for THC in hemp food products, based on an earlier released position paper in which the group makes a wide range of recommendations aimed at harmonizing legislation affecting THC levels across the EU. For now, stakeholders are pushing for THC-in-foods limits corresponding to those applicable in Canada, USA, Australia and New Zealand, i.e. 10 mg/kg.

Also, “EIHA demands rational THC in-crop limits for industrial hemp the Association said in an early 2018 release. It called for an easing of the 17-year-old restriction that sets maximum THC content for industrial hemp at 0.2% in Europe while other markets around the world set that limit at 0.3%.

“The hemp food sector has grown with considerable speed over the last several years and has reached a volume of €40 million in Europe and a global volume of €200 million,” according to EIHA. “Reasonable regulations, especially harmonized THC guidance values, are crucial for the further development of the domestic hemp food industry.”

The Association specifically called for the creation of a working group in the Directorate General for Health and Food Safety to address THC harmonization as it affects food from hemp seeds and leaves.

Despite the struggles, all indicators point to a continually expanding CBD market in Europe, with many suppliers across the continent also exporting to CBD-hungry North America. The demand for CBD is also spelled out in the search for planting seeds, said Hana Gabrielova, CEO at Hempoint. a vertically integrated Czech hemp company.

“Everybody is asking for high CBD strains, none of which are registered yet in the EU,” Gabrielova said. “We’re having to a do a lot of explaining to many clients that there are no registered seeds that were bred for high CBD. There are no guarantees about the levels of CBD in any of those certified strains out there.”

The lack of certified high CBD hemp varieties on the EU list of legal cultivars is attributable to the 0.2% THC limit observed in most European countries, Gabrielova noted. “The varieties are registered for seeds yield or fiber content but not for CBD content,” she said.

None of that has stopped the innovation with CBD. Most notably in Europe over the past year, low-THC, high-CBD hemp green matter is being sold like tobacco, rolled into cigarettes and in loose pouches. The craze started in Italy and Switzerland, both of which have relatively high allowances for THC in hemp (Switzerland up to 1%; Italy 0.6%) that are well above the 0.2% level observed across most of Europe.

Dubbed “nobacco” by American hemp guru Richard Rose, the product “is all health and no high,” says Rose, noting that CBD hemp can be grown like marijuana, either indoors or out.

“I see no barriers to entry in the U.S. or EU,” said Rose, noting the vast potential market in the U.S. among aging pot smokers who don’t want the strong high in marijuana, and tobacco smokers looking for a more healthy alternative.