Boo Williams, a former tight-end for the New Orleans Saints, talks with Montel about his NFL football career, and how utilizing cannabis helps him to manage chronic pain, depression and fight or flight symptoms. Boo is the founder of Black Ghost Enterprises, a multi-faceted branding company that includes a line of CBD products under the Boobeary br...

Why HempWorx CBD Industry is Booming Get in now!

Join the CBD Oil Industry!How to Start a CBD Oil Business from Home​Have you been watching this hot new industry that has virtually exploded onto the scene? Are you wondering how to start a HempWorx CBD Oil business from home? HempWorx, that's how! Now you can cash in on the emerging $7.1 Billion Cannabis industry! Now not all Cannabis gets you hig...

Your Coffee Just Got Better!

So, what's all the hype all about? We know what you're thinking..."Is this another fad? What are the benefits?" Let us put you at ease and state that this coffee is amazing. There are many articles out there on this new product. Marie Claire Magazine explores the concept behind CBD Coffee, benefits and what CBD is. Many coffee manufactures are coming up with their own version of CBD Coffee, which begs the questions of which one is the best out there. Research CBD So, there are plenty of reasons you should give CBD a shot. But, before you jump on the bandwagon, make sure to do a bit of research and learn about the origins of the products, the preparation method, and so on.

Did we get your attention? Then, here’s what you need to know. HempWorx has been in business for many years. Manufacturing their products in FDA approved facilities. The Hemp farms are in Kentucky and go through vigorous third party certification. Now, can any other coffee manufacture say that? The great thing about combining coffee and CBD is that they can help boost your brain function without overwhelming each other. Coffee acts as an excitant while CBD fights anxiety symptoms. It’s a great duo and an excellent way to kick start your morning.

As you can see, CBD and coffee are one of the most inspired ways to introduce this natural ingredient in your life. Just wake up and smell the coffee, as CBD is giving you the energy you need to tackle your day. Benefits of HempWorx CBD Hemp Infused Coffee 150mg of Hemp-Derived CBD Per Box Each cup of our delicious coffee contains 5mg of Hemp-Derived CBD ​Instant Arabica Coffee Our coffee uses Arabica Beans and other powerful ingredients ​Healthy Coffee Our coffee uses all natural ingredients and is Gluten Free, Vegan, Cruelty Free, and Non-GMO. ​

Affordable Get our coffee today for as little as $2.30 per cup! Zero THC This product contains ZERO THC 60 Day Money Back Guarantee We are so confident in our coffee that we give you a 60 day empty box refund policy. If you change your mind within 60 days of ordering, send it back and we’ll refund your purchase.

HempWorx Free Sample Pack  Limited samples available - Only $11.95 shipping & handling The World's Purest CBD Hemp Oil - Order Online ​HempWorx products are made from industrial hemp plants grown on Kentucky farms. Cannabidiol (CBD), a constituent that naturally occurs in industrial Hemp, is just one of over 85 cannabinoids that is i... 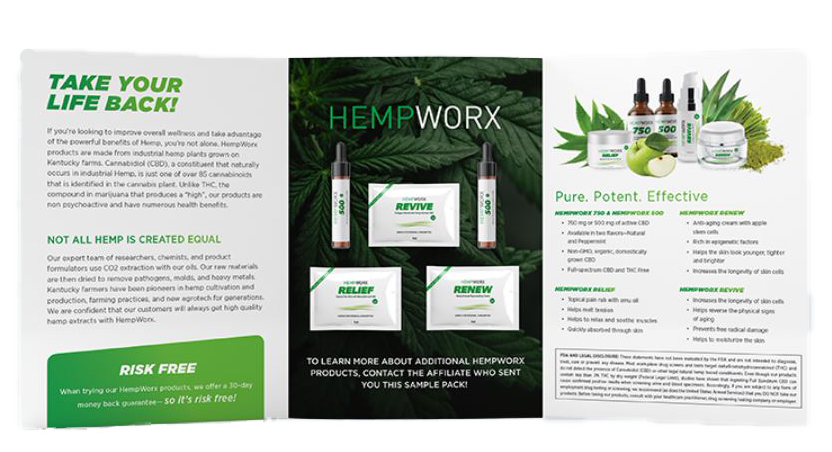 WeedCircles.com is used by business professionals in more than 120 countries -- to help them connect, share information and successfully navigate the constantly-changing landscape of the hemp and cannabis industry world-wide.

WeedCircles.com was officially launched in 2014 and according to its management has gone through a dozen updates over the past three years. This latest version, however, represents a major milestone in the company’s social network platform.

The re-release of the WeedCircles platform includes a major re-write of the network’s base code to include machine learning. This major release that leverages “AI” will provide users with information and business connection that have the highest probability of being valuable and instrumental to their social business growth.

Social Life Network services multiple industries, including many sports verticals and the real estate industry. That expansion has, in turn, helped to raise the bar for the technology the network has been providing to the legal hemp and cannabis industry.

ORLANDO, FL / ACCESSWIRE / August 10, 2017 / More than 1000 new CBD businesses join the WeedLife Network, a wholly-owned property of Social Life Network, Inc. (OTC PINK: WDLF), over the past year. That's up from 100 the previous year. The CBD industry is wheels up, and taking off!

The WeedLife Social Network has more CBD and Hemp companies from around the world using it to connect, educate and market to consumers than any other website or app online. This puts WeedLife.com at center stage for the fastest growing and eventually the largest market in the world, Cannabidiol (CBD).

Industry experts believe that the sale of CBD infused products, aimed to help everything from skincare to pain management, will dwarf the THC industry by more than 1000% in time. The question on the minds of businesses that have now focused on supporting this next great health movement around the world is how much larger and when. Matt Karnes of Greenwave Advisors predicts at least a $3 Billion U.S. marketplace by 2021, in a Forbes article in mid-December 2016.

Shawn Tapp, CEO of Social Life Network, Inc., the social network technology that operates WeedLife.com feels the experts now need to recalculate their estimates up. Tapp thinks that with the radical increase of new CBD focused businesses from around the world that are using their social network to focus on educating consumers, means the consumer demand will drive the sales much higher than previously estimated.

He adds that for the past six months, their development team has been quietly working on technology that will cater to this new audience, and they aim to heavily monetize this international consumer traffic and worldwide business participation on their WeedLife Social Network.